skip to main | skip to sidebar

One of the interesting points today was seeing "Dog on the tucker box, 5 miles from Gundagai."

I had heard the background of the story as, "A fellow in the outback was down on his luck, had no money or work and did not even have food. So he left his tucker box, being too weak to take it, and his dog, who sat on it to guard it, and waled farther on. He subsequently died, and those who found his tucker box found the dog faithfully guarding it." At least this is my memory of the telling. 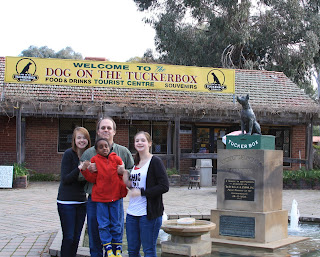 The poem tells another story. Apparently the fellow owning the dog had his laden wagon pulled by oxen, and the wagon and oxen were mired in the mud. He tried to get them out only to have the harness broken by an ox. Frustrated he walked out of the muck, sick of the harship and ready to give up. The ultimate insult was that as he walked up the bank to his tucker box, his dog had "shat" on it; adding insult to injury.

That the dog "sat" on the tucker box is a sanitized version of the story. 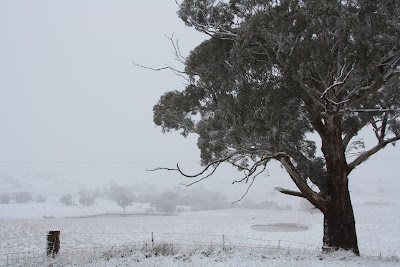 It snowed the previous evening and part of the night, making the beautiful normative landscape into a beautiful snowy landscape. (Most of these pictures are taken by Beth).

Unfortunately, this was the first opportunity to go riding, the morning at least, since we were driving toward Canberra after lunch. So Jay, Kylie and Amy drove to High Country Trail Rides, on a wet, snowy morning. Even the very stout Percheron (what Percheron is not stout?) I was mounted on did not produce enough metabolic heat to keep me warm, unless I put my gloved hands directly on his back. I just about considered going bare back for the benefit of his radiated energy, but sitting in the saddle was challenge enough for one morning.

The riding was a pleasure. Pauline, of High Country Trail Rides was a very effective teacher and a safe manager, and walking through the woods, mounted on a strong horse for a dampened hour and a half broken only by chatting and conversation made a grand morning. Who can possibly finish riding without thinking to themselves, "I wish I had a horse!"

From Oberon we drove over highway 13 to ward Canberra. We passed Lake George, a lake very like Sumas Lake in BC, Canada which has been drained and is now farm land. A short while later we sited the skyline of Canberra. Thinking back now, we wish we would have stayed an extra day In Canberra to see some of the historical records, monuments, government, etc. However, we were into the Canberra Motor Lodge in the evening (actually a permanent travel trailer with 2 bedrooms; comfy in a minimal-efficient way. 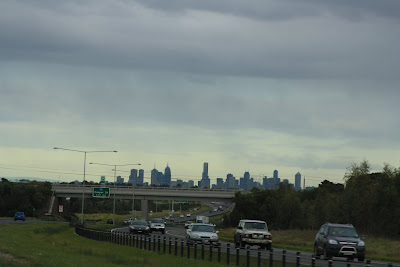 Posted by Unknown at 4:32 AM No comments: 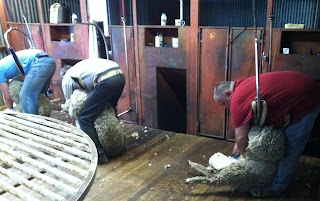 I was familiar with farmers waiting for a few dry days before they could cut and bale hay, but it never occurred to me that sheep would also have to be dry before you could shear them. The last two days have been very cloudy and windy, perfect for drying wool on the sheep I guess. So Redbank Farm, where our hosts Tim & Fran Charge live, is having a shearing this morning. They hired two shearers, and a third young bloke who is learning to shear, were hard at it in the shed; about 3 hours into it by the time we arrived at 10:30 to watch. 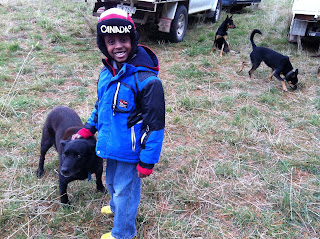 When we drove up from the cottage, we went up the dirt road to the shearing shed. It looked quiet from the outside, 3 Dorsett rams in an adjacent pen, 6 utilities (pick up trucks), every one white with the flat bed and apparently every one brought their working dogs! The yard was full of Kelpies (an Australian breed of working cattle & sheep dogs.) Tim's "Schooner," an affectionate mooch, attached himself to Bentley who was generously distributing as much affection to whomever he could get his hands on. After the picture above was taken, Bentley says, "I'm in heaven!" 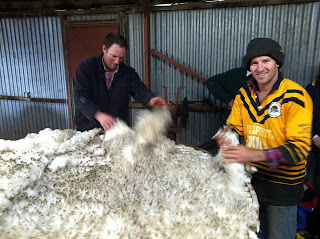 Inside the shed we found 3 shearers, 1 certified wool grader, 1 handyman and Tim (the owner) and a couple dogs, trying to participate. Bruce, the grader (smiling in yellow above), was a wealth of information and loved to talk about farming and sheep. He had a friendly, enthusiastic way of explaining how wool is cleaned and graded or why sheep are crossed to produce lambs with different qualities. It was fascinating; we like sheep a lot, having raised a handful back in Toledo days. As a biology teacher I gleaned a lot of useful information relating to farming and genetics. 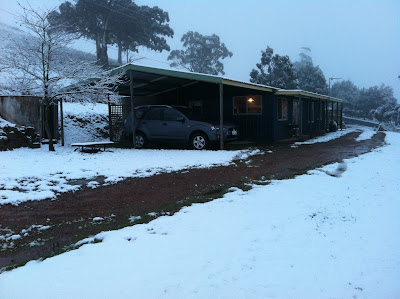 Tim squeaked the shearing in! Though the morning was nice, by the end of the afternoon it began snowing! This picture, of the cottage, was taken at dusk the same day! The recently shorn sheep were kept in an enclosure and fed to avoid risk of problems in the cold weather.

Snow? In a way, snow was disappointing, it looked so much like Toledo now; not very much like Australia! Still, it is beautiful; very beautiful.
Posted by Unknown at 9:01 PM No comments: 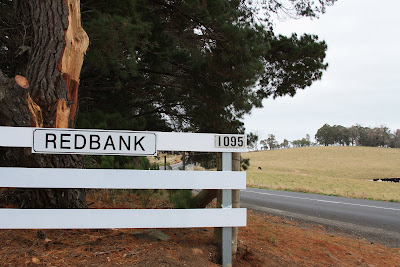 Tim Charge, owner of Redbank Farm and the Billabong Cottage, gave us a tour of his farm. We piled into his 4-door Toyota utility with one of his working dogs leashed to the flat bed on the back. He owns a number of acres and leases others. We saw a large number of his beautiful Angus cattle, bred and sold for beef. Beautiful tar-black bovines with their longer winter coats on, looking, at the risk of sounding juvenile, like stuffed animals you wanted to pet - they looked like a furry cow version of oversized teddy bears. Each time we drove near they were always curious about what we were doing and came over to inspect.

We saw rolling, grassed hills, neatly chop-stick straight fencing. One gate used retired wharf pilings as gate posts. Marine worm burrows were visible, probably the cause of their retirement, but the salt they contained from their former life and the chemicals used to preserve them originally, made them ideal for this purpose. The ant hills reminded you that there are a lot of insects that are very fond of eating wood. Tim explained there was another unintended consequence: the cattle also like the salt in the post and come over to like them. At this point they had just observed that and he withheld judgement as to whether that would ultimately be good or bad. I suppose in the best case scenario the posts could do duel purpose as gate support and ion supplements. 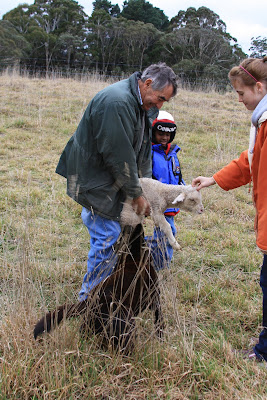 Passing through a paddock of heavily wooled merino ewes and strong lambs, disappointingly no longer in the recently-born, springing stage, we opened a gate into the neighboring paddock. Once through we saw a lonely lamb. Clearly he had climbed through or under the fence and gotten separated from his mother. Tim let us try to herd him back to the open gate, but when we climbed out of the car he bolted farther away. Jay and the kids walked toward the distant lamb, but Tim drove around with Beth and his working Kelpie, Scooter.

Tim parked the truck, released the dog and Scooter, following Tim's clear instructions, herded the lamb toward the gate - doing a better job than we did. This was a clear lesson to us foreigners of the value of dogs for working with sheep and cattle! The lamb made a panicked bolt for the fence, which it clearly knew was impenetrable, but its fear was uppermost. Then we got to see that working dogs do more than just run around: Tim saw the lamb crash into the fence and damage itself so he called to Scooter. She tackled the lamb and pinned it to the ground with her front paws. Surely the lamb was frightened, but pinned by the Kelpie, now it could not damage itself. Holding the lamb down - and having to prevent it escaping - Scooter did a very neat job until Tim walked over and picked up the lamb. It was more frightened than hurt, and he let Bentley and Kylie (and Amy who is not in the picture) pet the lamb. In a few minutes after it was calmer, he gently set the lamb down on the other side of the fence and it ran off to look for his mum.

After this Scooter too got a larger share of affection from Bentley, particularly, at which point Scooter was less keen to listen to Tim about jumping up on the truck. Scooter and Bentley both would have rather played and snuggled in the pasture together, but we had to go.

It was an astonishing pleasure to see how quickly working dogs perform their tasks and how acutely their masters, like Tim, can control and direct them; amazing!
Posted by Unknown at 8:43 PM No comments: 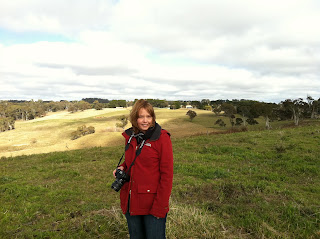 Billabong Cottage was a lucky find. We looked for a self contained "house" so we could come and go as we liked, and we wanted beds for all the kids (that means 4 at least) but many places were specialty types for romantic getaways and so on. Of course, something romantic with Beth sounds great - but the kids were along meaning something more user-friendly, and economical, would be better.

This cottage is a 4 bedroom home with a completely outfitted kitchen and wood stove, overlooking paddocks, woods, and the Fish Stream. The place is owned by a lovely couple, Tim & Fran Charge. Tim farms Angus for beef and merinos ewes for wool and lambs; Fran teaches at a local school part time.

It was so wonderful to be in a relaxing, rural place with all the amenities of home, and a wood stove to keep of the chill of Australia's winter. It was so nice, we even stayed on an extra day - or was it two? If we are even in this location we'll book again and try to fit in some trout fishing in Tim's well stocked stream! 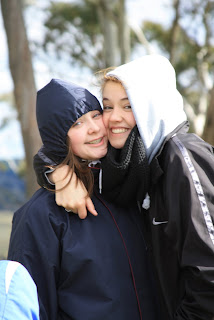 Amy and Kylie snuggling on the hilltop above Billabong Cottage.

Posted by Unknown at 9:08 PM No comments: 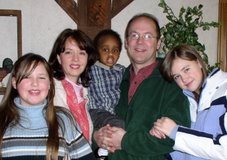